Hi friends!. Today we are going to talk about somebody who belongs to an endangered specie: the Playboy. I’ll give you some hints: He’s italian. He’s the manager of a Formula 1 team. He discovered Michael Schumacher and Fernando Alonso. For him Formula 1 consists in racing on Sundays and then going out with race girls. He's a businessman and has a yacht nearly as long as the Titanic. He owns a disco called “The Billionarie”. He’s got influential friends such as former prime ministers Jose Maria Aznar and Silvio Berlusconi. Didn’t you have enough hints? He’s almost sixty but he thinks he’s a teenager and he always dates babes who well might be his grand-daughters. Yes of course I’m referring to Flavio Briatore, the last Playboy. I’d like to be like him. A lot of money, a great yacht and partying round the clock with gorgeous girls who love his ¿body?. Here you are Flavio Briatore a real champion. I prefer him to Fernando Alonso. 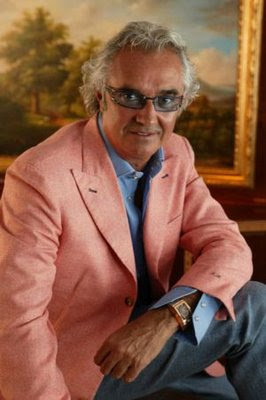 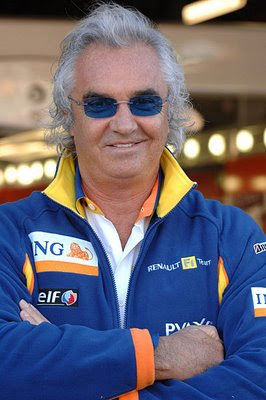 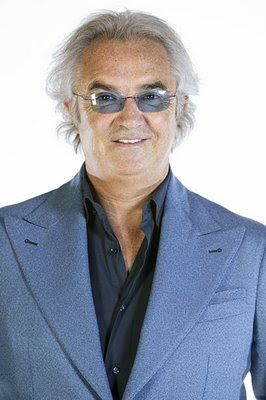 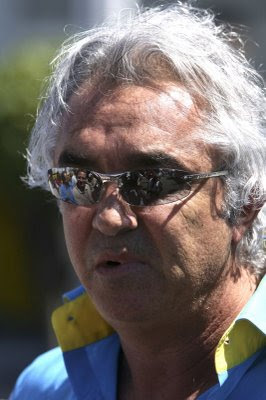 Let’s talk a bit about Flavio’s life. Flavio Briatore was born in Verzuolo, Cuneo, Italia on the 12th of April 1950. Both his parents were schoolteachers although Flavio wasn’t a brilliant student at school and finished his studies of land surveyance with the lowest possible grade. I’m sure that now he doesn’t regret not having been the first of his Class. If he had studied a university degree he probably wouldn’t have become so successful. At an early age Flavio started working as a ski monitor and later as a restaurant manager. Flavio opened his own restaurant, Tribula, named after his knickname meaning a person who will do whatever necessary to get what he wants. In the 70,s after closing the restaurant Flavio meets businessman Attilio Dutto and becomes his assistant. After Dutto’s death, Flavio Briatore moves to Milan and starts working in the Stock Market. Something will happen there that will change his life. Flavio meets Luciano Benetton (the owner of the clothing firm Benetton) and both become friends and eventually Briatore enters into partnership with him. In the first picture you can see both in 2001 at the launch of the Benetton Renault Formula One team. In the second and third pictures we can see Flavio as he likes to be: surrounded by gorgeous girls. 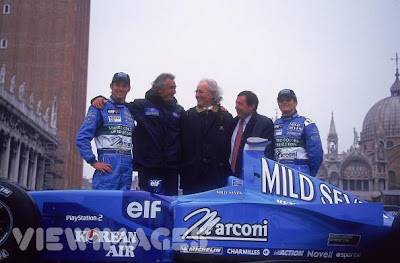 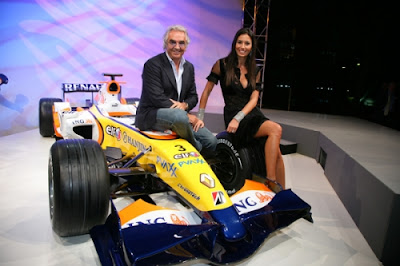 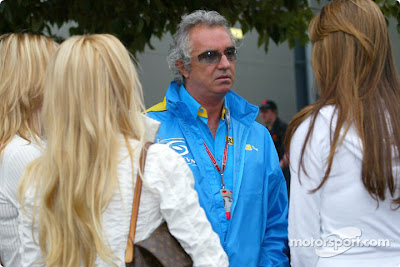 I said before that Flavio had been working for Atilio Dutto, owner of Paramatti Vernici. Flavio Briatore got involved in the bankrupcy of Paramatti and was judged for fraud in Bergamo and Milan being sentenced to 4 years and 6 months’ prison. To avoid jail he fled to St Thomas in the Virgin Islands where he kept close contact with Benetton and opened some of his stores. When Luciano Benetton opened his first five stores in the US in 1979 he appointed Flavio Briatore as director of the group’s American operations. Due to its unorthodox franchising policy Benetton’s popularity soon started to grow in the US and by 1989 more than 800 Benetton stores had already opened. When the owners of Benetton stores started to complain about competition by other Benetton stores and the number of stores went down up to 200 Flavio thought it was high time to search for new business opportunities and moved to Formula One. 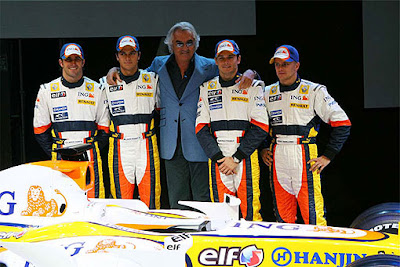 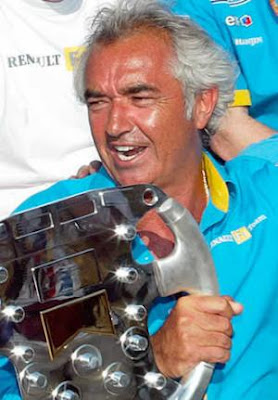 Flavio attended his first Formula One race, the Australian Grand Prix, in 1988 after having proclaimed his lack of interest in the sport in the past. Luciano Benetton appointed him commercial director of the Benetton team and soon after he fired the team managers Flavio Briatore was promoted to the post of general manager and decided to turn Benetton into a competitive team. The first important achievement of Benetton was hiring Michael Schumacher in 1991 and Flavio Briatore played an important role in the operation. Flavio was sure that Schumacher was the best and built the team around him. Briatore wasn’t wrong and Schumacher won the Formula One World Championship in 1994 and 1995. However, when Schumacher and other important members of the techincal staff departed for Ferrari in 1996 the Benetton team slipped to the middle of the grid and Flavio got sacked the following year. The second picture is superb. 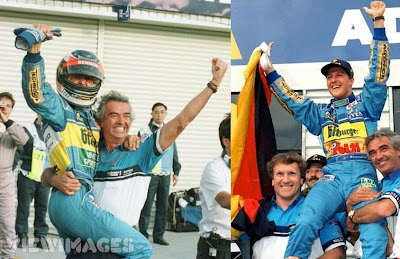 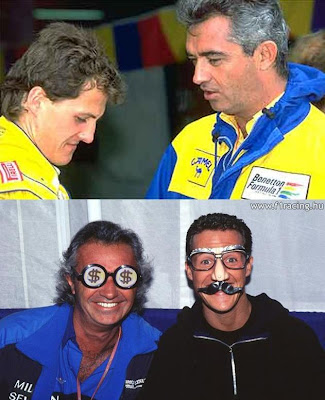 Between 1998 and 2000 Flavio Briatore’s business was to buy Renault engines and sell them to Williams, Benetton, Bar and Arrows. However, we have already seen that Flavio is a lucky man and his destiny would bring him another opportunity. In 2000 Renault comes back to Formula One buying the Benetton team and Flavio Briatore is appointed as its team director. It’s then when Flavio makes his great discovery: Fernando Alonso. Briatore met Alonso in 1999, secured him a post with Minardi in 2001 and promoted to test driver for Renault in 2002. In 2003 Flavio makes a controversial decision firing Jenson Button and replacing him by Fernado Alonso. Although he was highly criticized he was right again. Renault won two championships with Alonso in 2005 and 2006 before the Spanish driver departed for McLaren where he’s lived a nightmare in the 2006/2007 season. Now Flavio wants Alonso back in Renault. If I were Fernando I would make up my mind very quickly. Can you imagine the after race parties in Flavio’s yacht? I can’t..... 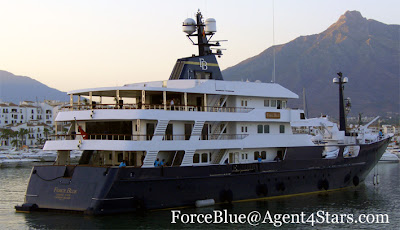 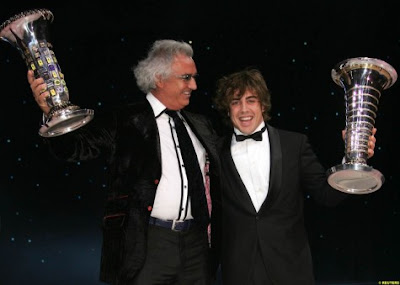 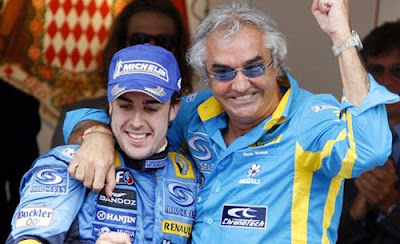 Flavio Briatore’s world is not only Formula One. He’s got several businesses outside Formula One many of which are closely linked to the fashion world. He created the Billionarie brand in 1998 and owns a club in Sardinia under the same name. Billionaire brand has a fashion and sportswear line as well as a haute couture line under the name of Billionaire Italian Couture. Besides that Flavio opened the restaurant Cipriani’s in Mayfair, London, in 2004 and owns the pharmaceutical company “Pierrel”. He also operates the “Lion in the Sun”, a holiday resort in Kenya. As many other millionaries Flavio has become interested in football and on the 1st of September 2007 it was announced that Flavio and Bernie Ecclestone had taken over the British soccer team Queens Park Rangers with the hope of getting QPR,s back to the Premiership again. Flavio seems to have taken it very seriously and he recenlty missed his first Formula One Grand Prix in years to attend a game of QPR,s. Time will tell but I’m sure that sooner or later he will sell QPR and make good money. In these pictures you can see him with several of his friends. In the last picture you can compare Flavio's girlfriend Elisabetta with Aznar's daughter..... 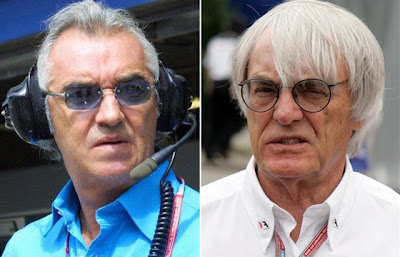 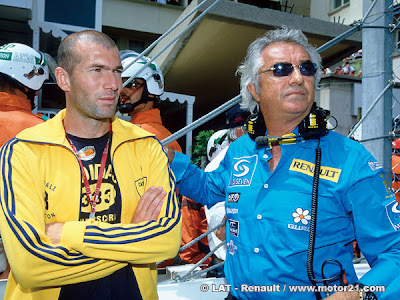 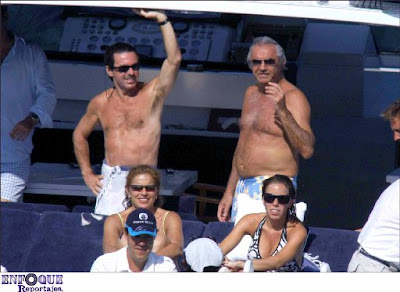 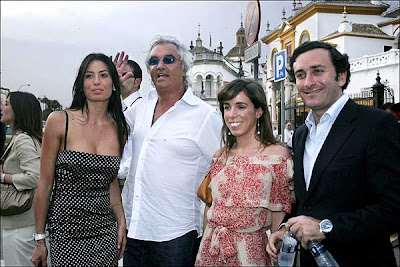 For years Flavio’s private life has been the center of attention of paparazzis and gossip magazines. Believe it or not Flavio is a playboy and has a lot more success with girls than George Clooney or Brad Pitt. He has an impresive curriculum of love affairs. I don’t know what he gives girls (I can imagine though) but he’s always dated the most beautiful girls. In the late 90,s Flavio Briatore gained notoriety amongst gossip magazines for his love relationships with topmodels such as Naomi Campbell, Adriana Volpe and Heidi Klum. Heidi Klum is the mother of Flavio’s only child, a daughter named Helena “Leni” Klum. Flavio broke off with Heidi when she was pregnant. They allegedly broke off because Flavio was cheating her with Vanessa Hilger, a 19-year-old German model. Such is Flavio, pure testosterone. Flavio is currently engaged to the 27-year-old Italian and Wonderbra model Elisabetta Gregoraci (last three pictures). These are his “official” relationships but he has dated many more gorgeous babes. 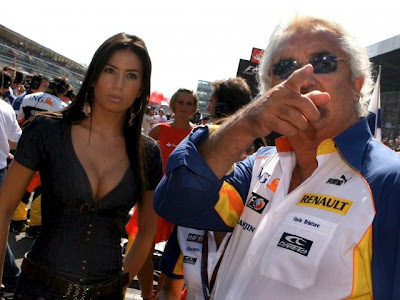 Anyway and after a medical check the doctors detected cancer in Flavio's left kidney and he had to undergo surgery. Flavio realized that, until then, 15% of his life had been superfluous and decided to change. He promised to devote more time to himself and those who need him. Anyway, Flavio please don't let us down because without you the fashion world wouldn't be the same. We still want to keep on watching pictures like these. 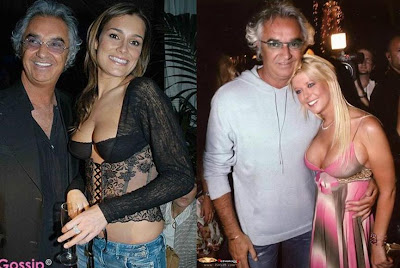 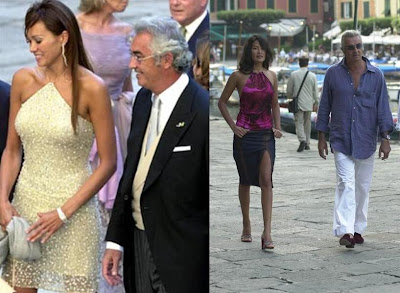 To finish the post I'll leave you a couple of videos. The first one is pretty funny. Regards.