Dear friends of fashiontotal: Today we’re going to talk about one of the most famous figures of the world of fashion and gossip: Victoria Beckham. Although I usually write in Spanish, I said to myself: why not trying in English today? Let’s see the results. With this post we are also paying our farewell homage to Victoria because she’s leaving Spain and moving to the US. What a loss!! We’ll miss her. She’s provided so many covers to Spanish magazines. David is going to play soccer for the L.A team for the coming years. Now that he’s performing at a very good level in Real Madrid he is moving to Los Angeles!! Let’s talk something about Victoria’s life. Victoria always dreamed of fame and stardom. And finally she got it. Every other day she’s in the papers and the magazines. She’s like a pain in the neck……. At the beginning of her career she was criticized for her appearance and for having short legs. She attended lots of castings looking for an opportunity and she even joined a band called “Persuassion” with which she recorded some horrible songs. Despite being a member of “Persuassion”, Victoria didn’t seem very confident on the band’s future and went on attending castings. Let me introduce you today’s special guest: Victoria Beckham. 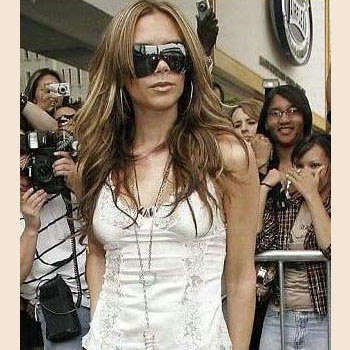 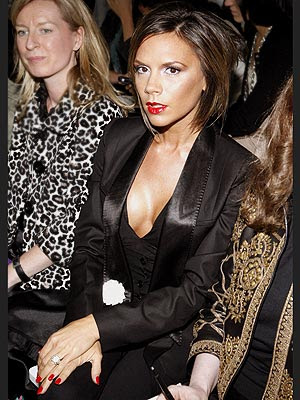 After so much searching, she finally met a group of girls that danced and sang. Well, they said so but there would be a lot to discuss about it…… Yes, you’ve guessed: The “Spice Girls”. With The Spice Girls she had a great success, sold a lot of records all over the world and got several awards. She started to be known as “Posh”. This nickname was given to her by “Top of the Pops” magazine and it really fits her perfectly. In this picture you can see Victoria and the rest of the Spice Girls. 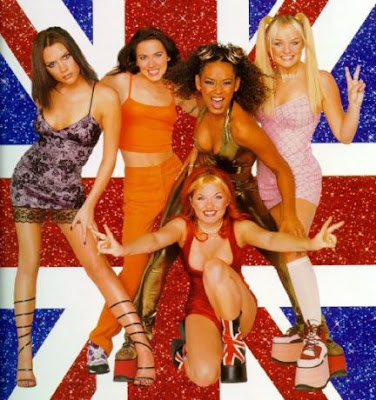 Victoria has always been known by her attraction for the fashion world. Her parents are: Anthony William Adams and Jacqueline Doreen Cannon (maybe she was in the Artillery….) and she is the oldest of three children. She’s married to the British soccer star David Beckham who she met in 1998. They got engaged on January 25th 1998 and she married David on July 9th 1999. They have three children: Brooklyn Joseph Beckham, Romeo James Beckham y Cruz David Beckham who was born in Madrid. 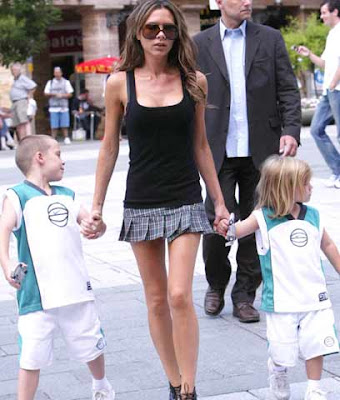 As far as her music ¿career? is concerned, in summer of 2000 she recorded the song “Out of Your Mind” alongside with Dane Bowers and True Steppers band. The song reached number 2 on the UK charts. She released her first single (a song called “Not such an innocent girl”) in 2001. Surprisingly, the song hit number 6 on the U.K charts but the album sold few copies. This, together with her new pregnancy brought her career to a dead end. Finally only 2 singles were released from her new album. In 2003 David Beckham signed a fabulous contract with the Spanish club Real Madrid and the couple left England and moved to Spain. Victoria found it very difficult to get used to the new situation and some of her statements to the Spanish gossip magazines were very controversial. She even said that Spain was a country that “smelled garlic” which was considered as an offence to the country she was living in now. She travelled to the UK as often as possible and Spanish magazines started to speculate about an affair between David and the family’s babysitter, Rebecca Loos. It seemed that David busied himself because he was also believed to have had affairs with other girls while Victoria was away. You know, when the cat is away the mice will play. This time I agree with David. I personally prefer Rebecca but this is only a personal opinion. I wish I had had a babysitter like her. Let's go on with Vicky. We left Victoria preparing her second album alone in cooperation with producer Damon Dash. It’s important to say that this new album had a new style much more rap oriented. But after the failure of Telstar record label (the company Victoria was working with), the album never saw the light of day and only one single was released, “Let Your Head Go”. The song hit number 3 on the UK charts and this was the highest position ever reached by an ex-Spice since 2001. She's fashiontotal even wearing sun glasses!! 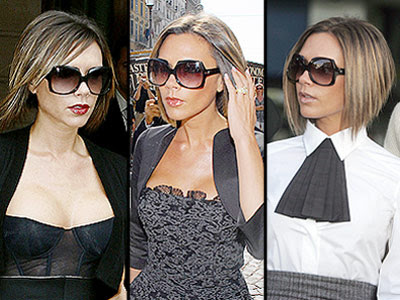 Later she released a DVD called “The Real Beckhams” including a documentary about the Beckham’s life, some unreleased Victoria’s songs plus two videos: “Let Your Head Go” and “This Groove”. The DVD hardly sold 17000 copies from which Victoria and David must have bought at least 16999. Pregnant of her third child and disappointed with the results of her single and DVD Victoria decided it was time to have a break. There was some news about a second single called “My Love Is For Real” but, although rumoured that the video was prepared, it was never released. 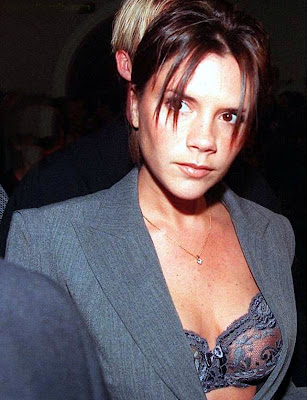 Currently Victoria is working as a fashion designer for the fashion company “Rock and Republic”. She owns a clothing line called “dvb” (David Victoria Beckham) that has marketed a number of jeans designed by Victoria. You can purchase them in the most exclusive boutiques in England. Their price is “only” 300€ just because they’ve been designed by “Posh”. Besides, she is going to launch a new clothing line for children, shirts, bags and even her own fragrance. Ok Victoria we can only wish you all the best in your new life in the US and tell you that we’ll be quite happy without you. 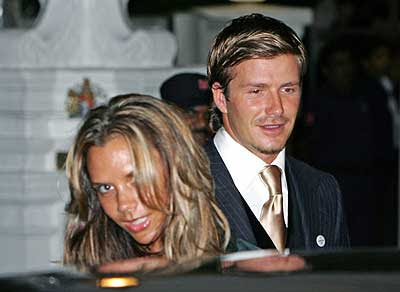 Here you can see what David and Victoria are going to do in a couple of weeks. Once the football season is finished they will take their luggage and leave Spain for good. Spain will never smell garlic again. Good Luck to you both. Best regards 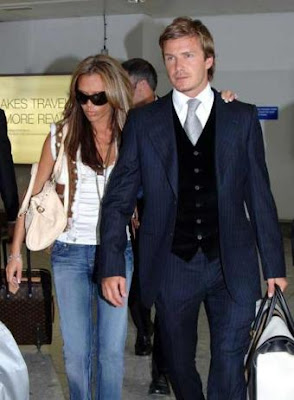